That’s not one of those hilarious Scrubbing Bubbles with the little yellow beard, that’s the Trinity nuclear test.  Scientists figure that the top of that bubble was at 200 meters high, and that photo was taken 0.016 seconds after the ignition of the device.

Today is the 70th birthday of the Manhattan Project’s Trinity Test — the 70th birthday of America’s nuclear child being born into the world.  In my humble opinion, this is the worst kind of light we’ve invented.  General Leslie Groves, Robert Oppenheimer, and their brilliant band of scientists and craftsmen created an explosion that created a brand new world for all of us on Earth to live in, and to fear.  As a matter of speaking created from a matter of fact, just the concept of using one of these weapons of true mass destruction stops any of us from using one of these weapons.  It’s a political term called Mutually Assured Destruction.

Project Trinity happened at the Alamagordo Bombing and Gunnery Range, now called Holloman AFB (also called White Sands Proving Ground back in the day).  Here’s a clip from The History Channel of the explosion — this right here is uncut footage of the blast, declassified a while ago.  Multiple camera angles and lens angles give some horrifying footage of this monster, and it is only a fraction of the weapons we have today:

Here’s another kind of terrifying video that I think most people have probably seen, but most definitely needs to be seen:

Of all of the video footage available of the Trinity nuclear test, I think there is one video for me that does it — it’s Robert Oppenheimer reading from the Bhagavad Gita. Just listen to his voice, read the look on his face. He knew exactly what he had done, and what he had put in the hands of America’s war-hungry defense managers.  What you’re going to watch is the face of a man who is terrified of what he just invented: 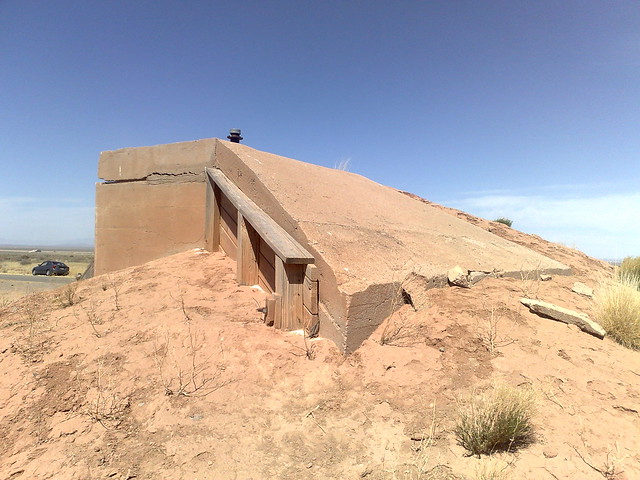 Here’s to hoping we invent better uses of light in the future for the sake of us all.