STORY TIME! Try to guess where in the world Lumen Sandiego is, and learn about some RE-DONK-U-LOUS-LY cool lighting art at the same time!

Some years ago, I travelled to an “Art Island,” which hosts work by some very spectacular artists, including Claude Monet, Jasper Johns, Andy Warhol, Tadao Ando, Yves Klein, Hiroshi Sugimoto, and most importantly for this post, James Turrell between its public art, museums, and hotel.

One museum is located underground, lit via sky lights and windows. I had just taken my first ever lighting design class, and was seeing lighting design everywhere in so much depth it was a little ridiculous (see definition for: obsession). There I saw my first piece by James Turrell, his “Afrum, Pale Blue” (1968). Seeing a piece of art made entirely of light and location impacted me, its simplicity as its strength. The next piece of his I saw was “Open Field” (2000). There was a guide, who motioned for us to remove our shoes, and I filed in to a line with some other patrons. I felt ritual saturating the room, as we were asked to mount the stairs. We reached the top step, and stood facing the wall, and the flat expanse of uniform blue light directly in front of us. It was the flawless, the smoothest, most perfect panel of light I had seen.

Then my mind was blown.

The guide directed asked us to enter. I suppose he must have motioned, because I don’t believe I spoke the language quite good enough to have understood. I was baffled. I knew I was staring at what I could only assume is the most flawlessly backlit piece of frosted plexi ever. There was nothing to enter. If I stepped forward, I would hit the wall and have humiliated myself, and the polite people in line with me. However, we trusted the guide, and stepped in to the wall.

It was not a wall, but a vast blue void. 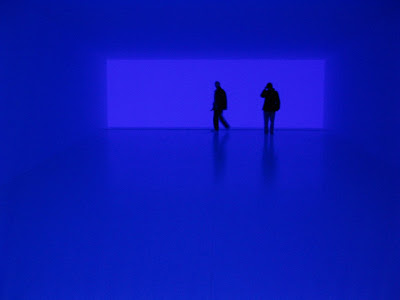 I was in an entirely different plane, I was in flatland, I was up against a wall, I was in infinity…

Long story short, James Turrell’s work is CA-RAY-ZAY! We wandered the blue space, exploring its limits, exploring ours, before we finally walked down the steps and put our shoes back on.

This was my introduction to the Light and Space movement. This art movement originated in the 1960s in Southern California. It used light as an integral medium, and focused on creating “perceptual phenomena.”

Why does this matter to us as lighting designers, technicians, or light lovers? Well, let’s just ask trusty ol’ Wikipedia what the Light and Space movement involved, shall we?

Whether by directing the flow of natural light, embedding artificial light within objects or architecture, or by playing with light through the use of transparent, translucent or reflective materials, Light and Space artists made the spectator’s experience of light and other sensory phenomena under specific conditions the focus of their work.

BOOM. In that one sentence, light was referenced 5 times. That’s more than your average show review. So clearly, these artists have found a way to make one hell of an impact via light. I will speak more about Light and Space movement in the next “Where in the World is Lumen Sandiego?” and give more examples of how they expertly manipulate light, but let’s keep this first installation short… QUIZ TIME!

Where do you think I was? I kept it very easy as this is the first installation of “Where in the World is Lumen Sandiego,” so enjoy the feat of victory while you still can! Post a comment, or I’ll reveal next time. Have a tip for a spectacular location of light “Lumen Sandiego” should visit? Submit your tip to daphne (at) jimonlight.com or via the contact form.

ALL ART HAS BEEN CONTEMPORARY

A Menage-A-Trois of Pigment, Oil, and Video – Pacific Light

Fox - September 19, 2011 1
Do you recognize these warning labels? Do you understand their meaning? Entirely? If you asked me those questions 3 years ago, I would have...

Jim - August 1, 2013 0
Looking for something awesome to watch tonight?  Laura and I are going to watch the documentary Sirius again in the next few days, but...

How to Make the Electric Pickle Experiment

Jim - August 26, 2013 0
A long-desired experiment in many Intro-to-Lighting lectures, the famed Electric Pickle Experiment is something that many older lighting teachers have shown to their classes...

Mycena lux-coeli – The Coolest Mushroom I Have Ever Seen

Jim - September 9, 2009 2
Can you imagine a salad full of these?  It would be the trippiest salad you have ever seen: What you see here is a Mycena...